Home » Electronics » Best ASUS Workstations in 2020 | Speeding Up The Workflow

ASUS workstations have created quite the buzz for the brand itself as of late. One simple way to identify whether a workstation is good is to watch their overall performance. So, if you see the laptop handling video-editing of large files in 4k efficiently then you will know it’s worthy. These days, the target customers for ASUS workstations are mainly those who use it on a professional level.

One of the main differences between gaming laptops and workstations lies in the GPU. After all, a workstation’s GPU is optimized to handle tasks like design and 3D rendering. On the other hand, GPU has not been made to handle intense gaming sessions.

In addition, the CPUs of ASUS workstations are much stronger. You can expect to find Intel Core i9 processor in a workstation. As for gaming laptops, it is normal for them to use Intel Core i7 processors. Now, you may ask, why does a workstation need such a powerful processor?

The answer to that question is simple: for speeding up the workflow. When you use apps such as, Adobe Premier the workstation will obviously have to rely on a powerful processor. Moreover, an app like Blender really needs a color-accurate display to work properly and those are available in ASUS workstations.

With that said, let’s take a look at some of these workstations from ASUS: 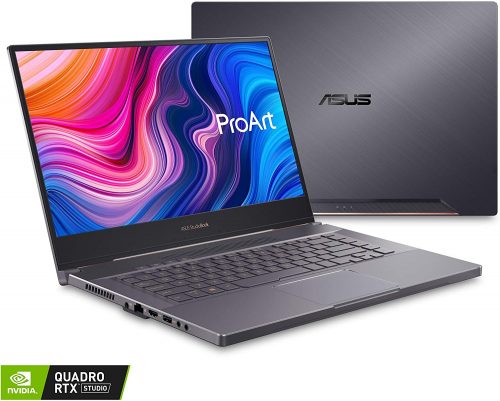 All it takes is just one look to know that the ProArt StudioBook 15 means business. It contains a really compact model and is affordable. These ASUS workstations contain a number of useful ports as well.

As mentioned above, you can understand the quality of a workstation by its conversion rate for multimedia files. In the case of ProArt StudioBook 15, it converts multimedia files with a size of 5GB in under 9 seconds. So, it is clear that the transfer rate exceeds 600 megabytes per second.

For the touchpad, there are no buttons and that may not be a bad thing at all. In addition, the touchpad is at the center, as a part of the palm rest. You will find the pad to be of average size that contain decent tactile clicking action.

With blue-gray colors surrounding the exterior, it looks easy on the eyes. In addition, the dimensions on its chassis is quite trim for the screen’s size. After all, this is a bit hard to believe that a workstation with dimensions 0.8×14.2×9.9-inches is a part of it. So, you have to give a lot of credit to the manufacturers for it.

On top of that, the build quality seems other worldly. When you add the magnesium alloy-based lid backing to the mix, the result is a sturdy workstation. It may come as a surprise that other parts of these ASUS workstations have been made with plastic. However, the manufacturers have done such a good job with it that you will hardly realize this at first. 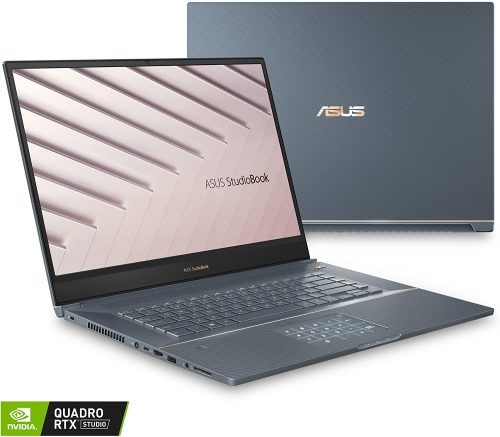 There are a lot of things to like in the ProArt StudioBook Pro 17. For instance, it has narrow screen bezels that are responsible for a screen-to-body ratio of 84%. In addition, it has a really thin profile that makes it one of the best ASUS workstations in the market.

There are quite a few aspects of its screen that can even impress the harshest critic. It also contains the modern WiFi wireless protocol as before. Of course, it is also known for having the Bluetooth 5.0 technology. In addition, it runs on Windows 10 Pro.

It was not an easy decision to downsize on the StudioBook Pro 17 but, it greatly improved performances. In fact, they have gone on to eliminate the conventional numeric keypads. At first, it will seem completely out of place. But, you should be able to find and use the button towards the upper right corner of the touchpad.

When you press this button, it will activate a virtual keypad. It is meant to replace the dedicated numeric pad and provide a better experience than the numeric pad itself.

It is really easy for the ProArt StudioBook to draw attention to itself. After all, the display is proof of the highest level of craftsmanship. Moreover, it consists of a unique 16:10 aspect ratio that has its own benefits.

On the other hand, the audio department of this device is top-notch. This may come as a surprise to many because these ASUS workstations have no dedicated subwoofer. In addition, you can turn up the music volume to the highest level without experiencing any major distortion.

The ASUS workstations on this list could do well with a few extra features. However, they will still deliver solid performances whenever you need them to. With that said, it is up to you to decide whether these ASUS workstations will suffice or not.

There are quite a few HP wireless mouse available on the market in 2021. HP

Ceiling TV mounts can usually take on three times the weight they suggest. They are