You sit at a nearby cafe with Marshall and order a strawberry smoothie and a lime slushie. You see a waiter taking a shovel from the counter and scoop in ice for your cold beverages. Cool. The cute waiter brings you the shakes and heads back. As you take a sip, you find a hint of spices in your shake. Cafe must’ve added a touch of pepper, you say? Or could it be ketchup stains from the counter? But the only thing on the counter is a shovel that goes into the ice machine. Just saying.

With the invention of the ice dispenser, you absolutely cannot have a regular ice machine anymore. That goes for fridges attached with ice dispensers as well. Smart fridges with built-in water and ice dispensers may be the hyped upgrade of 20th-century refrigerators, but they are not the most reliable. With issues ranging from arranging water lines to performance concerns and storage reduction, a separate ice dispenser may not be such a bad idea.

If you’re still not convinced, how about a report? In 2017, samples were taken in food establishments in Australia to test bacteria. Only 72.2% of food establishments were guilty of the presence of bacteria. Some of the bacteria were discovered in food, while others in drinks, mainly at the hands of employees. It’s strange how the same employees who clean the restrooms also scoop ice for your beverages.

You may have not given thought about what goes into your beverage. But we have. And that is why, have searched through ice dispensers available to bring you the best one. We present to you an ice dispenser by Scotsman. Scotsman has been manufacturing ice machines and supplying them to hotels, restaurants, bars, every single place you could possibly find ice. The company has been reinventing ice since the 1950s and has renowned customers. 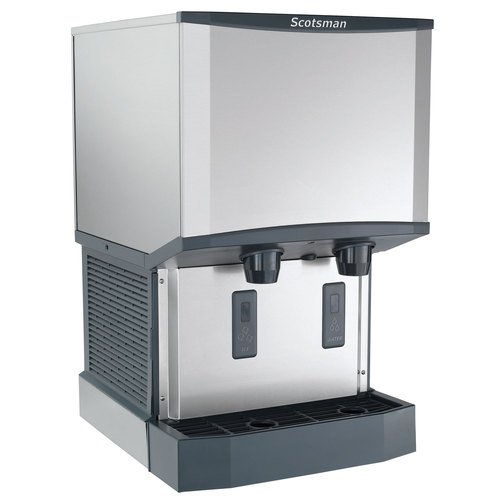 The HID525A-1 Meridian by Scotsman is both a water and ice dispenser that pours out clear water and nuggets of ice at the press of a button. The HID525A-1 is an air-cooled model and is one of the best ice dispensers in the market, probably of the only brand the actually works. Known for its convenience, efficiency, and durability, this is one ice dispenser you can count on.

The HID525 comes with a whopping 7.5ft power cord attached to a NEMA 5 – 15P plug. For ease of use, the air filter is hygienic and cleanable. The air flows from left to right and transforms the beautiful crystal water into dangerous ice bullets. Place it on the top of your counter or any other machine stand or tool and hit yourself with an ice bullet.

One innovation of Scotsman ice dispensers is that their internal ice storage boxes are all insulated at present. Insulation minimizes the probability of risky condensation that usually is created on the cover tops of the bin in increasingly humid environments.

Consists of 26 cabinet service parts which include the panels, and ice and water sensors, each portion is uniquely designed to provide you frosty shakes and chilled drinks. A total of 15 refrigeration service parts make up the HID525, of which are the condensers, compressors, valves, and motors. Scotsman has broken the record of exceptional dispensing components which include user-friendly thumb screws, and of course, the storage bins with insulation.

The Meridian Water and Ice Dispenser by Scotsman is constructed with stainless steel and has an exterior air filter. This 115V maker and dispenser has the capacity to work 24/7 to offer 500 lbs of brain chilling ice for you sodas. Maybe not brain chilling but 70°/50° soul-refreshing ice nuggets. The AHRI certified dispenser comprises of superior AgION and AquaArmor protection molded into the system and has a refrigerant capacity of R-404a.

The very touch of the grease-free bearings and the steel evaporator will send a chill down your spine, and also decrease maintenance issues. And when you open the cover of the HID525, you can easily see how look it will take for the 25 lbs. storage bin to fill up. On the outside, if you’re doubtful of ice getting stuck up there in the dispensing area, it’s less troublesome and more of an assurance to know that the sink opening and dispense hole are quite large.

Since the Meridian is both an ice dispenser and maker, you will require a proper drainage system. The drain of the ice storage bin is kept separate from the drain of the drip tray by another drain basin on the inside. Also, you may need to be on the lookout for a local plumbing code which demands a backflow preventer.

No matter how functional and high-end features the Scotsman has in comparison to popular establishments like Subway, easy cleaning is still a major issue to households as well as local food chains. Convenience of cleaning lies in the ability to remove parts and that’s what the Scotsman is all about. This dispenser consists of front panels and storage bin that are removable, so clean up and disinfect these babies all you want.

To compare with, there are not many functional ice dispensers in the industry. Then again, you will find Scotsman products used worldwide and even in your favorite cafe Subzero. We recommend for you the Scotsman ice dispenser where only you get to have ice straight from the waterline. Whether it is for serving margaritas at parties, chilling at home with vodka crans, upgrading your ice machine, or starting a new cafe, an ice dispenser is a priceless addition.

With the Scotsman Meridian HID525, you get contactless pellets of ice just at the touch of a button, without competition. So why choose any other brand?

Plastic storage baskets are necessary items for our homes. Imagine your basket is damaged, and

In this era of technology, we often forget that our bodies are not designed to